Two of Worth’s four texts on tuberculosis concentrate on the form of tuberculosis known as scrofula, a tubercular swelling of the lymph nodes. His copy of John Browne’s Adenochoiradelogia (London, 1684), not only investigated the nature of the disease but also it unusual treatment: cure by the royal touch. The following frontispiece of Browne’s book illustrates Charles II touching for the King’s evil, while his Chapter VII gives us a contemporary eye-witness account of the ceremony. 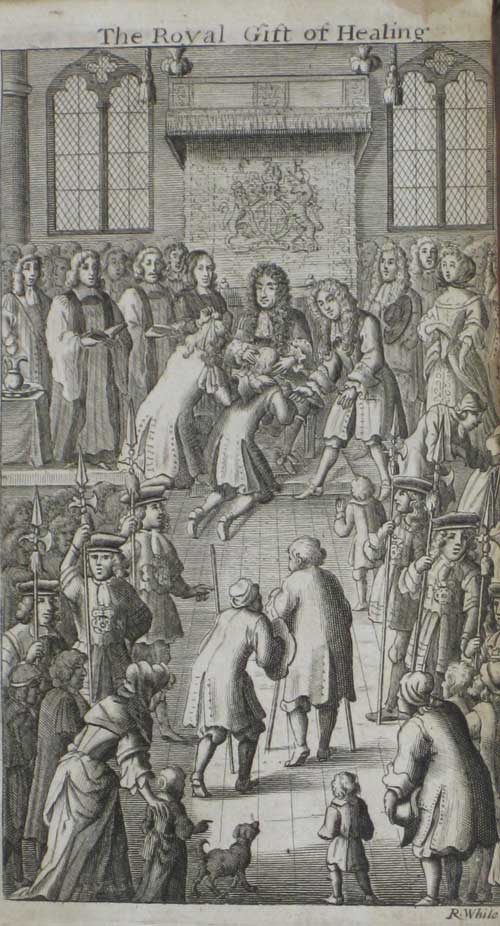 ‘…The Day being come, before his Majesty doth approach to his Royal Chair, which is generally after Morning Prayers, the Chief Officer of the Yeomen of the Guard doth place the sick People in very convenient order for their approaching the King without trouble or noise: The which done, His Majesty enters his Royal Chair uncovered, at whose beginning there are generally two Chaplains attending: One of which reading the Ceremonies appointed for this Service, His Majesty all the while being surrounded by his Nobles, and many other Spectators: The sick and diseased People being kept back by the Chirurgions till the appointed time, where after having made three Obeisancies, they do bring them up in order. The chief in waiting delivers them one by one to the King to be Touch’d; the which done, the other takes him or her from him, and this method is used throughout the whole number which comes to be Healed.The whole Method is as followeth. The Chaplain thus begins: The Gospel written in the 16th Chapter of St. Mark at vers. 14 Jesus appeared unto the eleven as they say at meat, and cast in their teeth their unbelief, and hardness of heart, because they had not believed them which had seen that he was risen again from the dead. And he said unto them, Go ye unto all the world, and preach the Gospel to all creatures, he that believeth and is baptized shall be saved, and he that believeth not shall be damned: all those tokens shall follow them that believe. In my name they shall cast out devils, they shall speak with new tongues, they shall drive away serpents. And if they drink any deadly things, it shall not hurt them. They shall lay their hands on the sick, and they shall recover. The which Saying is continued between every Healing of His Sacred Majesty, till all the Sick betouch’d by him; the which being finish’d, he begins this following part.

So when the Lord had spoken unto them, he was received into Heaven, and is on the right hand of God. And they went forth and preached every where, the Lord working with them, and confirming the Word with miracles following. The which done, he begins the Gospel written in the first Chapter of St. John, ver, the first: In the beginning was the Word…… He was not that Light, but was sent to bear witness to that Light. Here the Chirugions come up the second time, making their three Obeisances as formerly, where the Clerk of the Closet on his Knees doth deliver to the King his Gold ready strung upon a white Silk Ribbon; and when these following words come to be read, the King puts over the Gold.

THE LIGHT WAS THE TRUE LIGHT WHICH LIGHTNETH EVERY MAN WHICH COMETH INTO THE WORLD.

This running through the whole course of the Ceremony, which words are continually repeated between every one which received the Gold. This being finished, These following words are read: He was in the world, and the world was made by him, and the world knew him not; he came amongst his own, and his own received him, to them he gave power to be made sons of God: even them that believed on his name, which were born not of blood, nor of the will of the flesh, nor yet of the will of man, but of God. And the same Word became flesh, and dwelt amongst us, and we saw the glory of it, as the glory of the only begotten Son of the Father, full of Grace and Truth.

Our Father which are in Heaven, hallowed be thy Name. Thy Kingdom com. Thy will be done in Earth as it is in Heaven. Give us this day our daily Bread. And forgive us our trespasses as we forgive them that trespass against us. And lead us not into temptation. But deliver us from evil. Amen.

Vers. O Lord save thy servants.
Resp. Which put their trust in thee.
Vers. Send help unto them from above.
Resp. And evermore mightily defend them.
Vesp. Help us, O God our Saviour.
Resp. And for the glory of thy Name deliver us, be merciful to us sinners for thy Names sake.
Resp. And let our cry come unto thee.

O Almighty God, who are the Giver of all health, and the aid of them that seek to thee for succor. We call upon thee for they help and goodness, mercifully to be shewed to these thy servants, that they being healed of their infirmities may give thanks to thee in the Holy Church.

Through Jesus Christ our Lord. Amen.
The Grace of our Lord Jesus Christ, and the Love of God, and the Fellowship of the Holy Ghost, be with us all evermore. Amen.

This being finished, His Majesty having by my Lord Chamberlain, or in his absence the Vice-Chamberlain, and two other Nobles, brought up Linnen, and the Bason and Ewer to wash his Hands, He takes leave of the people, and they joyfully and thankfully do every one return home, praising God and their good King; and when this method is apparent to all men, and carries in it the greatest truth imaginable, what man of Sense, Religion or Honesty can there be, which shall dare to deny the truth and efficacy thereof, being both glorious and praise-worthy?’

The political applications of this process were obvious, emphasising as it did that the King was God’s anointed. Browne was eager to portray the ability to touch for King’s Evil as an English invention, if not peculiar then definitely original to the English crown. Not all agreed. Worth’s earliest work on the subject is André Du Laurens’ De mirabili strumas sanandi vi solis Galliae regibus Christianissimis diuinitus concessa liber unus (Paris, 1609).

Portrait of André Du Laurens: Courtesy of the National Library of Medicine.

Du Laurens had been as aware as John Browne of the propaganda possibilities of the ceremony and in seeking to enhance the popularity of Henri IV of France had been keen to emphasise the French origin of the practice – a debate which would be revived in the twentieth century by Marc Block (1973) and Frank Barlow (1980).